The history of Yamaha pianos

The Yamaha piano factory in hamamatsu has was established in 1887 by reed organ and piano manufacturer Torakusu Yamaha. It’s initial market was domestic market for which it quickly gained a positive name. The Yamaha company adheres to a corporate mission of “Kando” which roughly translates to the excitement of excellence in fine quality craftsmanship and engineering. This is an ethos that is reflective of their great reputation of high quality products.

After it’s early inception, the Yamaha Corporation expanded to create a number of different musical instruments as well as many other different products. You are probably familiar with Yamaha motorbikes, boat parts and sports goods to name a few.

By the 1960’s Yamaha was on the move and had set up a factory in the USA. By 1965 it was the world’s largest piano manufacturer. The Yamaha corporation was now a global entitiy.

By the early 1970’s the quality of the Yamaha piano had improved so vastly that they became highly sought after. Tbus began the era known as the “Golden Era” of piano making in Japan. 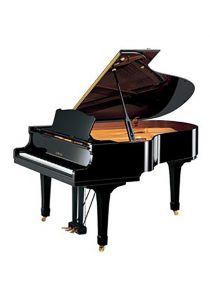 The “Golden Era” of piano making in Japan describes a period from the early 1970’s to the mid 1980’s when many professionals believe the best pianos were ever made.

In its earlier years Yamaha pianos were treated with apprehension. Like any brand that seeks worldwide expansion it was important for Yamaha to build a strong reputation. During this era the “Kando” approach was at its strongest. The establishing Japanese manufacturing sector was developing a reputation for high quality, reliable products. Yamaha was no exception.

The quality of Golden Era Pianos

In contrast to modern times, most people would agree that the 1970’s and 1980’s was an era that goods were made to last. Cars were expected to last for 20 years rather than 5. Furniture, and white goods were common wedding presents and were built to last. It was quite a different mindset to the consumerist mentality of today. Today you can buy a toaster for $12 with the expectation you will be replacing it in the not too distant future.

Why buy a refurbished Piano ?

The wonderful advantage of a refurbished, Japanese manufactured piano is that you are buying into the 70’s and 80’s mindset of a piano that does not skimp on quality. These pianos used the highest grade of raw materials we have seen on a piano. Their soundboards were expertly seasoned and there strings are superb. Unlike cars, pianos technology has not changed much since the 1900’s but manufacturing has. These pianos have the advantage of a fine instsrument that has been fully refurbished to take them decade into the future. That’s why we back them all with a 10 year warranty.

We have no hesitation in giving every one of our Yamaha pianos a 10 year warranty. Our warranty covers everything from sticking notes to more serious issues. We have so much faith in their quality that we have total confidence in their performance well beyond 10 years.

Come and see our range today!